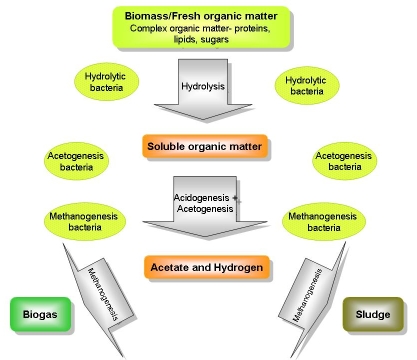 The organic macromolecules break up into simpler elements - solid waste thus is liquefied and hydrolyzed in small soluble molecules (e.g. the cellulose is transformed into soluble sugars such as glucose or cellobiose.

This process transforms these simple molecules into acids of weak molecular weight such as lactic acid and volatile fatty-acids from 2 to 5 carbon atoms. In parallel are produced low-weight molecular alcohol, such as bicarbonate ethanol and molecular hydrogen.

The products resulting from fermentation require an additional transformation before being able to produce methane. It is here that intervene the acetogenes reducing bacteria and the sulfato-reducing bacteria, producing hydrogen sulphide (H2S)